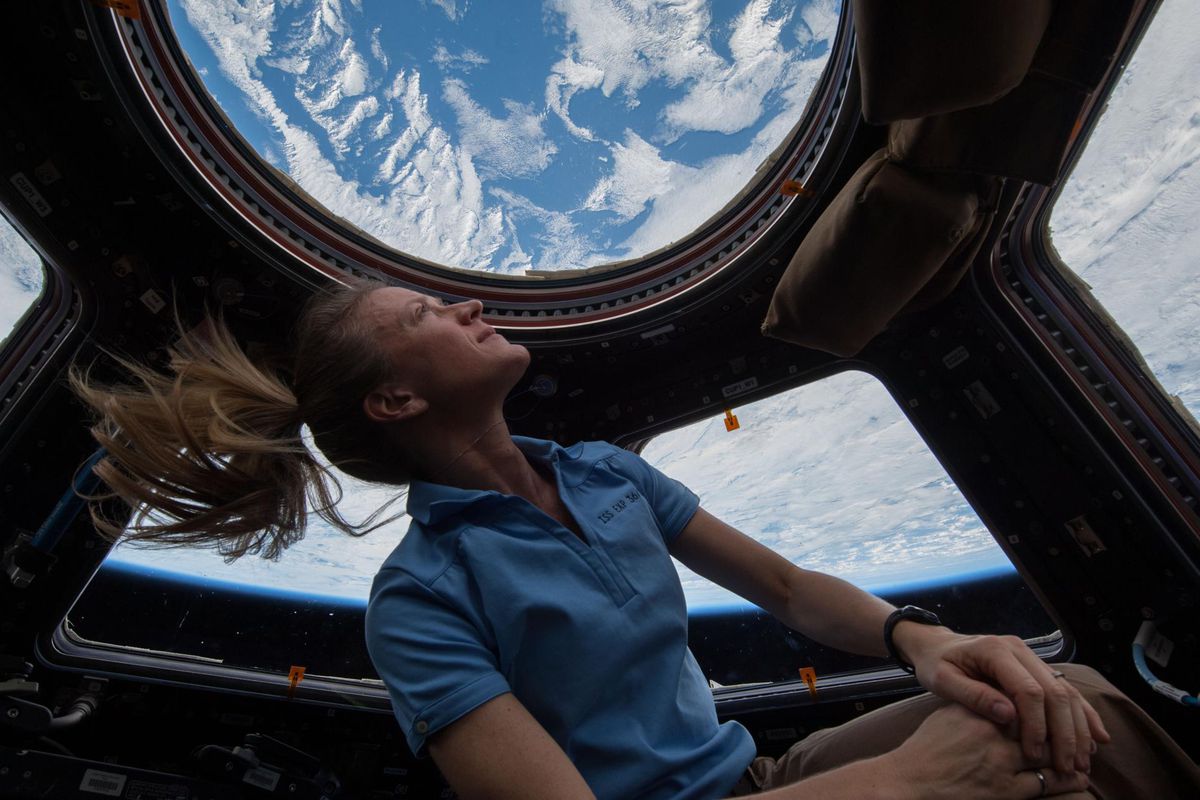 When it comes to building the interior of a spacecraft, engineers often prioritize function over aesthetics, focusing on materials and hardware that are both safe and effective for executing the vehicle’s intended mission. But some scientists say it’s time to consider another crucial factor when designing a spacecraft’s insides: how it will affect the behavior of the passengers?

For astronauts traveling vast distances — perhaps on a trip to Mars — the design of a spacecraft’s interior could be a critical tool for keeping people happy and healthy during the journey. Room will likely be limited on any vehicle we send to the Red Planet; getting massive objects into space takes a lot of energy and money, so the interiors on these transports could be tight. And passengers will be stuck with the same group of people for the entire ride — a trip that could take years to complete. All of those conditions could create a nightmare scenario for a person’s psychological health, causing stress, bad sleep schedules, depression, and other negative feelings that might affect their time in space.

That’s why a new workshop next week plans to address this often-overlooked aspect of space travel. Called Space^2, the event will bring together astronauts, health professionals, and design experts in Cambridge, Massachusetts, to discuss what types of technologies and hardware deep space missions can include inside their spacecraft to make interplanetary journeys a more enjoyable experience. Up until now, astronauts have mostly experienced short trips to space, usually lasting less than a year. Because of this, spacecraft interiors have revolved around optimizing volume and less on giving people peace of mind. And some experts say that needs to change.

“Not much has been done in terms of the design and interior of the spacecraft,” Dorit Donoviel, director for the Translational Research Institute for Space Health and one of the conference organizers, tells The Verge. “It’s really about where they want to place their levers, their displays, what kind of materials they’ll use in terms of preventing bacterial growth. I don’t think there’s been too much emphasis on the behavioral or really the human side of some of these interior environments.”

Unfortunately, there isn’t a ton of research out there to guide engineers on the best spacecraft design for keeping astronauts in good spirits. That’s because conducting research on isolation can be tough to pull off. “These are difficult experiments to do ethically anywhere in the world, really,” Ted Smith, director of the Center for Healthy Air, Water and Soil at the University of Louisville, tells The Verge. “There’s really a lot more that we don’t know than we do know about how the social psychology and the personal individual psychology degrades when circumstances degrade.”

“THERE’S REALLY A LOT MORE THAT WE DON’T KNOW THAN WE DO KNOW.”

But some investigations have been done in this area, looking at how small groups of astronauts might fare when trapped together in confined quarters for an extended period of time. For the last six years, the University of Hawaii has overseen simulated Mars missionson the side of an active volcano, Mauna Loa, on Hawaii’s Big Island. During these missions, small groups of people live together in a fake Martian habitat called HI-SEAS for months at a time, allowing scientists to better understand how people might interact when on a mission to Mars. (The owner of HI-SEAS now plans to run fake Moon missions at the habitat, now that NASA is focused on a return to the Moon.)

Between 2010 and 2011, Russia and Europa studied a crew of six, who lived together in a simulated spacecraft for 520 days, the approximate length of a human mission to fly by Mars. They only had 775 square feet of space for the entire experiment, about the size of a tiny one-bedroom apartment. Investigators found that some stopped moving around as much toward the end of the experiment, a few experienced an increase in depressive symptoms, and most of the participants had abnormal sleep schedules. One crew member no longer had a day / night sleep cycle.

Some historical situations provide context for what might happen on a mission to Mars. One Russian cosmonaut, Valentin Lebedev, wrote about his strained experience spending 211 days on board a tiny space station called Salyut-7 in 1982, with just one other crew member. “It’s a really compelling story, because there were periods of time they weren’t even talking to each other,” Jay Buckey, a former NASA astronaut and a professor of medicine at the Geisel School of Medicine, tells The Verge. Numerous expeditions to Antarctica have also put scientists in close quarters, surrounded by an unwelcoming environment. The Belgica, the first expedition to spend winter at the continent in the late 1890s, experienced significant struggles when the ship became trapped in ice. The crew on board couldn’t go outside much, and many experienced severe mental health issues as a result of the experience. “They had a really high rate of psychosocial problems, part of which might have been due to the environment they were in,” Buckey says.

Ultimately, humans are physical and visual human beings, says Donoviel, and space travel can deprive individuals of some of their basic desires. Plus, the longer people stay on a spacecraft, the harder it can be for them. “It’s a challenge to live with a small group of people for a long period of time, and there are definitely issues with stress, conflict, and sometimes depression,” says Buckey. For instance, when NASA shifted from doing Space Shuttle missions, which lasted for just weeks at a time, to six-month stays on the International Space Station, there were anecdotal reports of astronauts experiencing much more psychological stress, according to the space agency.

“IT’S A CHALLENGE TO LIVE WITH A SMALL GROUP OF PEOPLE FOR A LONG PERIOD OF TIME.”

It will all be much worse on a mission to Mars than it is for those on the ISS. The ISS has about 32,333 cubic feet of interior space, about the volume of a Boeing 747, NASA says. That allows crews a bit more room to move around. But for a Mars mission, NASA has estimated that the minimal acceptable volume for a human mission to the Red Planet will be about 883 cubic feet per person. For a four-person crew, that adds up to about the size of four 17-foot U-Haul trailers. Donoviel hopes that this number could potentially grow based on some more behavioral research. “Unless we bring forward the requirements for the humans to the engineers, we’re going to be given a number we’re just going to have to live with, and I’m not sure it’s going to be sufficient for health,” she says.

Of course, there are others who want to go to Mars, too, and make it a luxurious experience. Private spaceflight company SpaceX, dreams of creating a more spacious vehicle, the Starship, to take people to the Moon and Mars. During a presentation, SpaceX CEO Elon Musk has said the interior pressurized volume of the vehicle would be about that of the ISS. And the company is known for valuing aesthetics as much as function in its designs, which could make things a little more pleasing to the eye. Still, SpaceX runs into the same problem of isolation. Astronauts on the International Space Station are able to look out the window and see Earth whenever they please, feeling a connection to home. Earth will only be a speck in the distance for those on a mission to Mars.

One way experts are thinking of combatting this is through the use of virtual reality. VR headsets were given to crews on the simulated HI-SEAS missions in Hawaii, showing them scenes from the Bavarian Alps and beaches in Australia, something they very much enjoyed, according to Buckey. Such technology could be a way for astronauts to momentarily escape the daunting task of going to Mars.

Another concern for astronauts is that they will have to stay with the same group of people for such a long period of time. The astronauts on the ISS rotate crews every few months, so they can work with different groups of people from time to time. Mars astronauts will not have that luxury. This lack of diversity, combined with a lack of privacy, is thought to be a stressor too, says Smith. “It’s a thought experiment we can all do about how we can become very sensitive over periods of time to small annoyances from each other,” says Smith. “There’s abundant evidence that we as humans require interaction with lots of other folks, and when you reduce those numbers and you hold them constant, the variability that we look for goes hungry.”

“THERE’S ABUNDANT EVIDENCE THAT WE AS HUMANS REQUIRE INTERACTION WITH LOTS OF OTHER FOLKS.”

To combat this, it’s possible that engineers and designers might want to introduce certain smells and sounds inside the cabin. “It turns out there are certain smells that make people feel like they’re surrounded more closely by people and certain smells that make you feel like you’ve got a little more space between you and your fellow humans,” says Smith. In fact, various cedar scents and bright colors were used on the British Antarctic Survey’s research station in Antarctica to combat the blues of being cooped up all winter. Smith also notes the possibility of creating synthetic human beings with visuals on walls or conversational bots akin to Siri or Alexa.

There aren’t any correct solutions to these problems yet, but the Space^2 conference could put engineers on the right path. “This is a great chance for us to think about things great and small that we can bring with us and things that are analogue and digital we can bring with us,” says Smith. And while a human mission to Mars is still many years away, experts say it’s time to think about this now so we can plan the design of these spacecraft well in advance. If behavioral health isn’t taken into consideration, adverse reactions could be disastrous for deep space travel.

“We really don’t know how these folks will react to such a confined space. And the consequence of that is loss of crew or loss of mission,” says Donoviel.